Register Now for the Nadon Reference Symposium on May 28 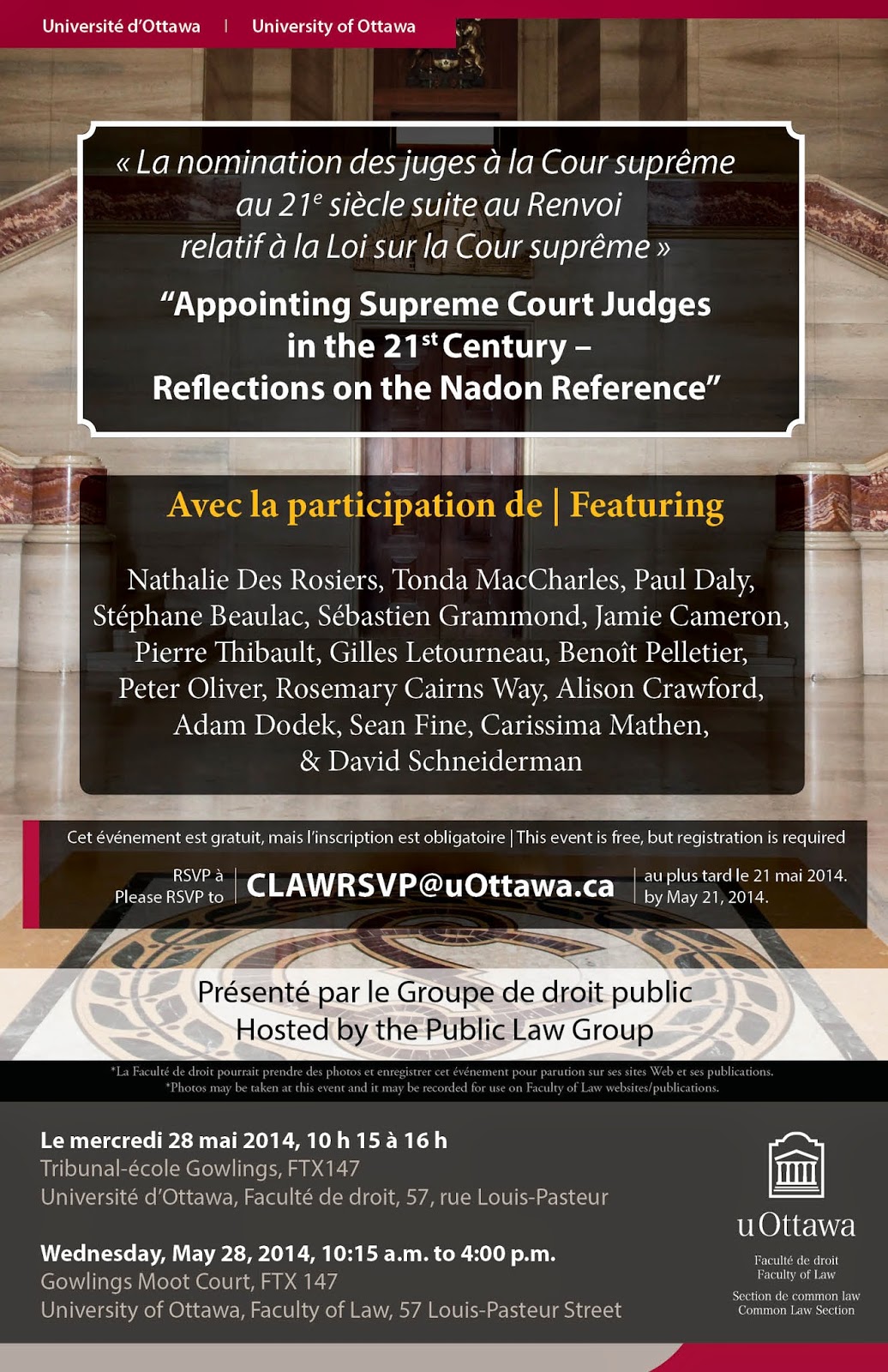 More details here.
Posted by Paul Daly at 12:26 No comments:

Here is a radical suggestion from a 1997 essay by Peter Cane: "public law claimants should be free to specify the result they want to achieve by their claim and ask the court to provide an appropriate remedy".

The suggestion seems radical because courts sometimes tend to treat public law remedies as rather inflexible. Things are better than they were when the prerogative writs reigned supreme, but there are two recurring problems. One, at least on the surface, courts tend not to pay much attention to remedies, devoting much less space in their written reasons to remedial questions. Two, courts are sometimes distracted by unnecessarily complex multi-factor tests from the need to right the wrong done to the claimant.

Hot off the press: the Law Society of Upper Canada (Ontario's legal regulator) has rejected Trinity Western University's application to be an accredited law school.

TWU is a private, Christian law school located in British Columbia. Students must sign a 'Community Covenant' which requires them to make various commitments. As Jeremy Webber has explained:


It requires students “reserve sexual expressions of intimacy for marriage” and defines marriage as exclusively between a man and a woman. Students can be disciplined if they breach the covenant.

This means, for example, that validly-married gays and lesbians would be barred from TWU unless they renounced “sexual expressions of intimacy.” It is this discrimination against same-sex relationships at the foundation of the objections.


The legal framework for accreditation is complicated. A national body, the Federation of Law Societies of Canada, sets out criteria for law schools to be accredited by regulators across the country. It approved TWU's programme. But some individual law societies have had to decide whether or not to ratify this decision. Ontario's is one of them. British Columbia's is another: its decision-making body voted in favour last week (although steps have been taken to hold a ballot of all members).

My thought since the beginning has been that decisions either way -- to accredit or not to accredit -- would probably survive challenge in the courts. Canada's well-ingrained practice of deference to administrative decision makers means that where there are multiple possible reasonable outcomes, it is up to the decision maker and not the courts to choose.

TWU won a landmark judicial review in 2001 when their accreditation for a teacher training programme was rejected, for two reasons. First, BC exempts private institutions from some anti-discrimination obligations. Second, there was no evidence of discrimination by TWU graduates: signing the community covenant did not mean they would be homophobic in their professional lives.

But there are three problems for TWU now which undermine the 2001 precedent.

First, other provinces do not have equivalent exemptions, and in making accreditation decisions -- as is the case in Ontario -- they do not have to give effect to the exemption.

Second, in 2012, in Doré v. Barreau du Québec the SCC held that, when applying the Charter, a decision maker only has to achieve a proportionate balancing between Charter values and its statutory objectives. This arguably reduces or obviates the need for evidence of discrimination (although to the extent there is evidence of general harm from exclusionary practices, this could presumably be taken into account). Allied to this is the enhanced legal status of same-sex relationships: although the relevant law on equality has not changed drastically since 2001, the TWU covenant discriminates on the basis of sexuality by treating same-sex married couples differently from opposite-sex married couples, so the violation of Charter values is much more obvious than it was in 2001.

Third. LSUC's decision-making process bore the hallmarks of "transparency, justification and intelligibility": its decision is clearly understandable and was taken pursuant to a process that was rigorously fair to all concerned.

For these reasons, I think TWU would face an uphill struggle in court. It may not decide to go down that route but if its graduates are unable to work in Canada's largest legal market, the cachet of a TWU law degree would be significantly reduced.

A tragic accident occurred in Seaworld, Orlando in 2010. A trainer interacting with Tilikum, a killer whale, was dragged underwater and killed. An investigation by the Occupational Health and Safety Authority ensued. Seaworld was found to have violated the duty to provide a safe workplace and lost its challenge to the order made pursuant to this finding: Seaworld v. Perez (D.C. Circuit).

Symposium on the Nadon Reference: May 28, University of Ottawa 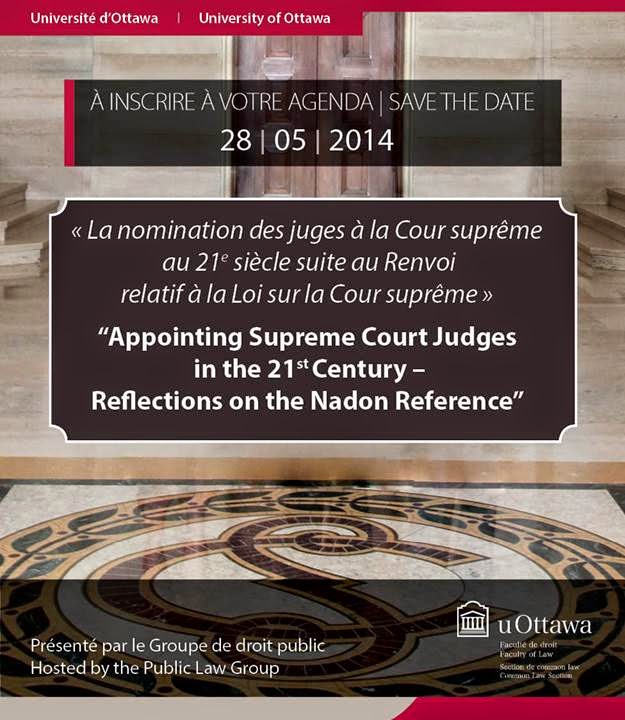 I have been organizing this event with Carissima Mathen from Ottawa. We have a stellar line-up of guests to analyze the decision and its consequences. I look forward to seeing you there!
Posted by Paul Daly at 10:24 2 comments:

A New Blog on Administrative Justice

I previously mentioned Unjust by Design, an excellent book on administrative justice by Ron Ellis. The book was recently shortlisted for the prestigious Donner Prize.

Ron now has a website and blog, Administrative Justice Reform, on which he discusses various aspects of administrative justice. His recent series of posts on the restructuring of federal tribunals is a must-read.
Posted by Paul Daly at 12:59 No comments:

Sunstein on Breyer on Reasoned Decision-making

Cass Sunstein has a nice short essay on Justice Breyer in a forthcoming issue of the Harvard Law Review, "From Technocrat to Democrat":

There is an epistemic argument for judicial deference to the decisions of administrative agencies and legislatures: courts do not have easy access to relevant information, and they should defer to those who do. People who are steeped in technical issues, and alert to the importance of those issues, might well be inclined to embrace judicial modesty. In administrative law, then-Professor Stephen Breyer pioneered the view that judge-made doctrines reflect unarticulated assumptions about regulatory policy, and he urged that such doctrines could not be evaluated without a sense of the underlying substance and the likely human consequences. In light of the complexity of the substance, Breyer argued for a degree of modesty. On the Supreme Court, Justice Breyer has often embraced judicial modesty as well, emphasizing the importance and relevance of complex judgments of fact (sometimes with the aid of what we might call "the Breyer Appendix"). The principal qualification is his insistence on reasoned decision making, which he appears to regard as a quid pro quo for deference, as an aspect of the rule of law, and as an indispensable check on arbitrariness.

Reasoned decision-making as a condition precedent to deference is an increasingly attractive proposition in Canada, where affidavits and agency litigating positions can be used to place a decision-maker's thumb on the interpretive scales.

To borrow from Sunstein:


The most important point here is that an agency may not defend its policy simply by asserting its preference. It has to offer reasons. To be sure, there is a risk that a judicial demand for reasoned decision making will serve, in practice, as a judicial demand for reasons with which judges agree...Nonetheless, a requirement of reason-giving can be seen as an effort to ensure that technical expertise is in fact being applied...

Martin v. Alberta (Workers’ Compensation Board), 2014 SCC 25 does little or nothing in the way of doctrinal development, and so should not be expected to have a lasting impact on the law. Three aspects of this Supreme Court of Canada decision are nonetheless worth highlighting in an effort to explain why Martin is best confined to its special facts.

Who Decides Here? Deference on Ministerial Interpretations of Law (Again)

I was rather optimistic in thinking that the question of deference to ministerial interpretations of law had been settled by the Supreme Court of Canada in Agraira (see my post here).


to issue an injunction, writ of certiorari, writ of prohibition, writ of mandamus or writ of quo warranto, or grant declaratory relief, against any federal board, commission or other tribunal.

A notable absentee from this list is the writ of habeas corpus. Since its assertion that the "rule of law must run within penitentiary walls", the Supreme Court of Canada has given prisoners a choice between making habeas claims in the provincial superior courts or judicial review applications in Federal Court.

Towards the beginning of his classic essay "The Core of the Case against Judicial Review", Jeremy Waldron notes that his argument is not directed against review of executive action, that is, most of what we conventionally call administrative law.

The exclusion has always struck me as strange. Waldron's argument is that courts are ill-suited relative to the political branches to determining questions involving rights. For precisely this reason, many supporters of 'political constitutionalism' would prefer the judiciary to withdraw from the field of judicial review of legislation.

Yet courts engaged in judicial review of administrative action end up determining just these sorts of questions on a regular basis. A remarkable recent example is the decision of the UK Supreme Court in Kennedy v. The Charity Commissioner 2014 UKSC 20.

A background check on a teacher reveals criminal history. He is fired by the elected members of the local school board after a meeting held behind closed doors. He contests the decision and seeks to question three of the commissioners before an arbitrator. They refuse, citing privilege. Unsuccessfully, as it turns out: Fédération autonome de l'enseignement c. Commission scolaire de Laval, 2014 QCCA 591.
Read more »
Posted by Paul Daly at 09:37 No comments:

Commentary on developments in Administrative Law. I focus on Canada, but with a lens wide enough to capture the United States and Commonwealth jurisdictions.